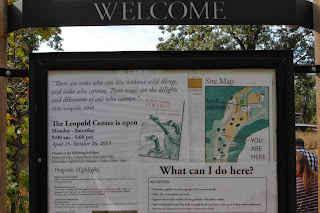 quickly and explained that he would do his best to show us both sites, the Center and the Shack in the time allotted. The Center is fascinating. Until recently, it was the greenest building in the world. Some of that distinction comes from the use of local materials in the construction. Highlights for me:


The stone wall that holds the rain run-off from the roof and sends it to the native plantings is made from an old Civilian Conservation Corps building that had been torn down and saved. Our guide explained that a check of records revealed that Aldo had once lectured inside that very building. You can see some old cement adhering to the stones. 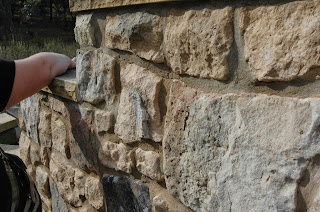 Much of the wood harvested to construct the buildings came from the original Leopold property with white pines having been planted by the Leopold's themselves. Here is a shot of the ceiling with red maple boards serving as material between the joists 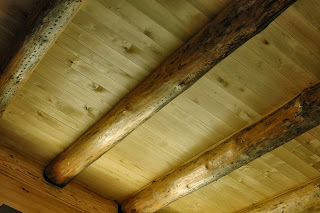 But I was distracted. I was so close to the Shack! I wanted to maximize our time there. We boarded the bus for the very short trip to the shack and all exited. After a quick warning about the poison ivy, our guide told us of Aldo's purchase and the family's less than enthusiastic reaction at the condition of the Shack. We started down the path, the Shack obscured by trees that were not alive 80 years ago when Aldo purchased the property. And then, around a curve, it came into view. 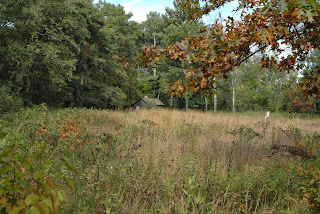 We got closer and all stood in a semi-circle facing the Shack and learned of a few pieces of history. The Leopold's built an addition (left side of photo) for sleeping quarters. The chimney had to be rebuilt several times. Aldo was a bad cook.
The first group went inside and the rest of us were encouraged to pick an apple or two. I didn't need to be told twice.
"These things I ponder as the kettle sings, and the good oak burns to red coals on white ashes. Those 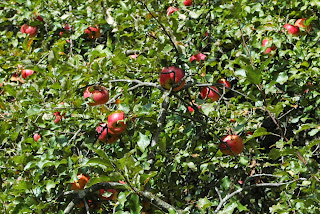 ashes, come spring, I will return to the orchard at the foot of the sandhill. They will come back to me again, perhaps as red apples, or perhaps as a spirit of enterprise in some fat October squirrel, who, for reasons unknown to himself, is bent on planting acorns." Good Oak


I spent considerable time looking for bur oak acorns. Leopold writes about bur oaks several times and I really wanted to try to plant a few on my property. But those fat October squirrels (and other pilgrims to the Shack) beat me to them. I grabbed instead a handful of red oak acorns and chuckling, turned to the following: "I had a bird dog named Gus. When Gus couldn't find pheasants he worked up an enthusiasm for Sora rails and meadowlarks. This whipped-up zeal for unsatisfactory substitutes masked his failure to find the real thing. it assuaged his inner frustration." The Round River. If any of my acorns take root, I will think of Gus.

When it was our turn to enter the shack I sat at Aldo's table and listened intently. I was most curios about the artifacts on the walls, including Aldo's shovel:

"Why is the shovel regarded as a symbol of drudgery? Perhaps because most shovels are dull. Certainly all drudges have dull shovels, but I am uncertain which of these two facts is cause and which effect. I only know that a good file, vigorously wielded, makes my shovel sing as it slices the mellow loam." Pines Above the Snow 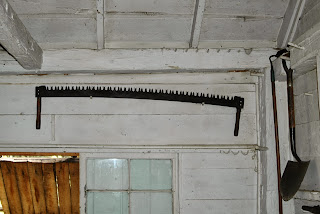 "We let the dead veteran season for a year in the sun it could no longer use, and then on a crisp winter's day we laid a newly filed saw to its bastioned base. Fragrant little chips of history spewed from the saw cut and accumulated on the snow before each kneeling sawyer. We sensed that these two piles of sawdust were something more than wood: that they were the integrated transect of a century; that our saw was biting its way, stroke by stroke, decade by decade, into the chronology of a lifetime, written in concentric annual rings of good oak." Good Oak

Two saws were found in the Shack. The other is displayed in the Leopold Center. One of them is undoubtedly the saw used to process the Good Oak: 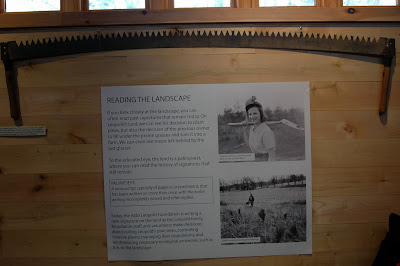 Look closer at the photo above. That is Estella, The Leopold's youngest (and now only surviving) 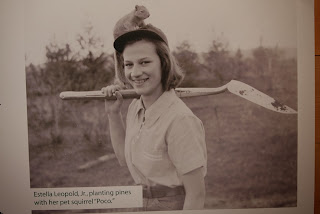 child. I heard Estella speak in 2005 at the Wildlife Society conference in Madison, Wisconsin. And now I have another connection to Estella. Last year, I taught a brand new class called Wildlife Field Techniques. We worked hard as a group to create a class that was both educational and meaningful. No other group of students will be pioneers in the sense that these were. It was a great experience for us all and in appreciation, the students of that class arranged a gift for me. So on the last day of class the students presented me with the gift and I was genuinely surprised and appreciative. I opened the bag and found a copy of Sand County Almanac. I must confess that I was a bit confused. Surely these students knew I had a copy of this book and, seeing its disrepair thought I could use a new one. But just as surely they must know I would never give up my first copy. All confusion disappeared as I opened the book and found it pesonally inscribed to me from Estella. What an amazingly thoughtful gift!

I posed in front of the Shack on a Leopold bench with that very edition in my hands. And it was that book that I sat with and read Great Possessions while at the "holy land" itself. 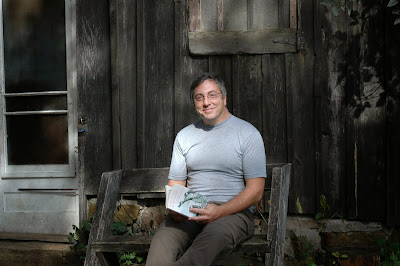 Gone now were the worries of late buses, missed meals and unfound acorns. There was only genuine happiness at my place in the sun.

Thank you for your comment! It will appear shortly...